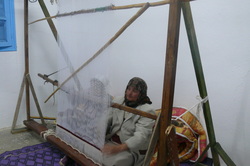 The workshop was officially opened in November 2010, although the incubation period was longer and it started around the summer at least one year before 2009.
The idea for this workshop came a lot of textile art by chance, it all started when I (Manuel) and Ramzi (the only man in the group) we met in 2009 in one of the poorest areas of Tunisia a group of women from a poor village, almost cut off from national and regional development plans, a village seemed to have stopped for an indefinite time in the past and have locked in a kind of social and economic stagnation. No opportunities for work, no social or economic cultural activity promoted by the locals, or addressed to it. Although living conditions were not (and are) the best, because the village is still not reached by telephone lines, many homes have no running water, some even have electricity.

Speaking with these women we found that many of them were able to knit, crochet and frame and they were also very good.From here it all started. We built the studio which now has 17 people.

The objective of the workshop is to be primarily an opportunity for social advancement and development for the village, to provide job opportunity to this group of women and the engine also be training for the promotion of these craftsmanship, and not only .... not only because the studio was also involved in literacy activities for women of the village, we started the course to teach the girls how to read and write, use computers, etc..

Atelier ten girls working crochet, knit two, two to the frame, a girl is in charge of supervision and logistics, Ramzi and I take care of the bureaucratic aspects, management and marketing.
The workshop is called in Arabic Darnissè Darnissè because it means the house of the ladies, in its very structure the workshop is organized as a living room of a house, where women gather, work and learn, grow professionally and personally and buying a new safety in their own abilities, potential and their rights.
The objective of the workshop in the long term, however, is also to become a reference point for the textile crafts market that is why we are committed in finding the best raw materials and because our work is realzzati entirely by hand with care andpatience. Each of these creations is a unique, original and unique because it is unique and valuable work of each woman.